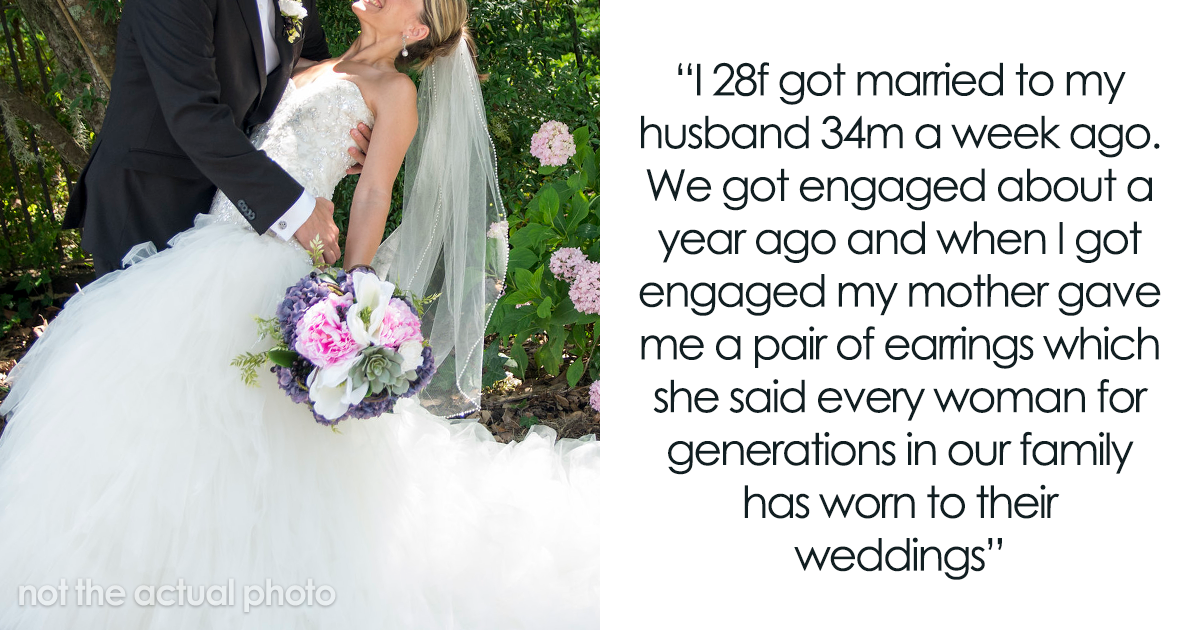 Heirlooms are items that are passed down from generation to generation and have immense sentimental value. It connects you with people in your family who are no longer alive or whom you haven’t even had the chance to meet. Not only do they have sentimental value, but they usually have decent monetary value as good quality old things are expensive.

This woman on Reddit received her family heirloom before she married and it was a pair of earrings given to women of every generation. She loved them, but the bride was not the only one. Her stepmother took a particular interest in them and thought she could just take them and is now facing the possibility of charges.

The original poster (OP) got engaged a year ago, then her mother gave her a pair of earrings that have been passed down to women in every generation. It was a luxurious pair of earrings with 4 carat diamonds. A diamond of this size can cost between approximately $28,000 and $160,000 depending on the shape, color, cut and clarity.

The earrings meant a lot not only because they cost a small fortune, but also because they once belonged to the OP’s grandmother and she had sadly passed away a few months earlier, so it was a little piece of her that the woman could carry with herself. 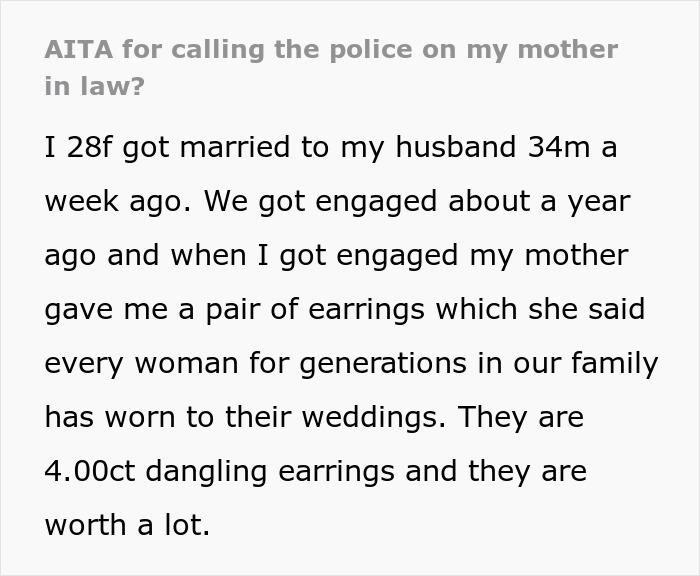 The OP planned to wear these earrings on her wedding day, so when she went shopping she wanted to make sure the dress matched them. The woman brought her mother, her sister and MIL to accompany her and help her choose. It was then that her MIL saw the earrings and was mesmerized by them.

When these earrings went missing a week ago on the wedding day, the OP immediately knew it was her MIL who had taken them. The bride confronted her but she pretended not to know anything. What was even more suspicious was that when asked to show her purse, she refused.

She planned to wear them to her wedding and even chose a dress to match, impressing her mother-in-law 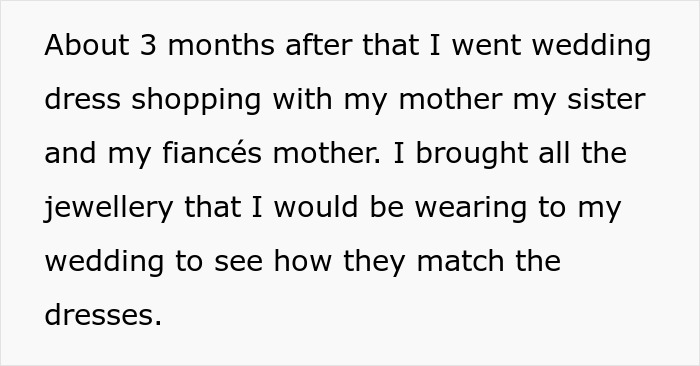 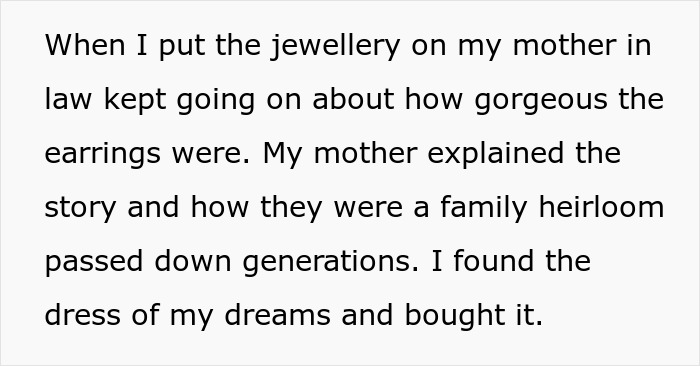 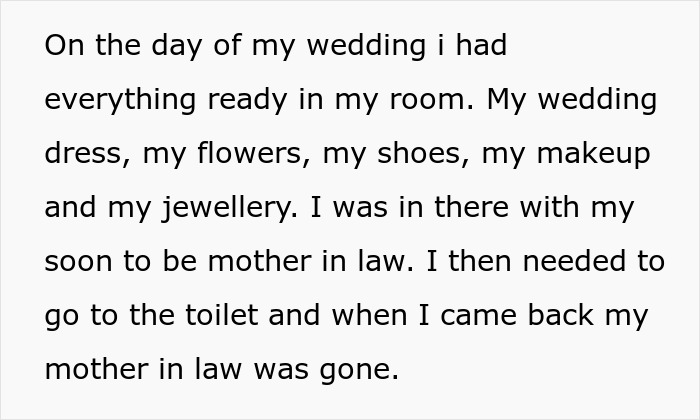 They weren’t just a pair of earrings you can buy anywhere and they were great value. As Reclaimed Leather puts it, “Heirlooms represent family history, wealth, and treasured memories. More than objects, they serve as symbols for stories that deserve to be told and preserved indefinitely. A family legacy connects you to the struggles and successes of your loved ones, and because of that, they are irreplaceable.

Because of this, the bride decided to call the police. Surprise surprise they found the earrings in MIL’s purse so the bride had a right to complain but it was her mother in law after all her husband’s mother so she wanted consult it first.

A week passed and although her husband will support any decision made by the OP, she was reluctant to act. Her husband’s family sends her threats and her MIL is also very angry with her.

When bored panda contacted the PO, she told us that when the police found the earrings in MIL’s purse, she did not admit that she had taken them. The stepmother hasn’t apologized since then and the woman guesses she stole the earrings because she wanted her to fall apart as the two never got along in the first place.

Her mother-in-law was so mesmerized by the earrings that when they disappeared on her wedding day, the bride knew she was the one who had taken them

More often than not, women already have trouble getting along with their mothers-in-law. Madeleine A. Fugère, Ph.D. who is a professor of social psychology at Eastern Connecticut State University states that this happens most often because the stepmother would not have chosen their son’s wife based on traits. that they appreciate.

Mothers-in-law may be intimidated by their beauty, feel in competition for male attention, or unconsciously discourage long-term relationships, because from an evolutionary perspective, short-term relationships benefit men more. .

So imagine that on top of that, the son doesn’t have a good relationship with his mother and the stepmother steals a valuable piece of jewelry from the stepdaughter.

After the mother-in-law refused to show her handbag, the bride called the police and they found the earrings inside. 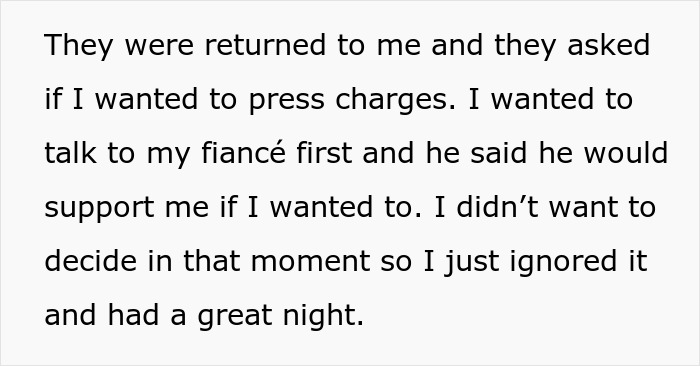 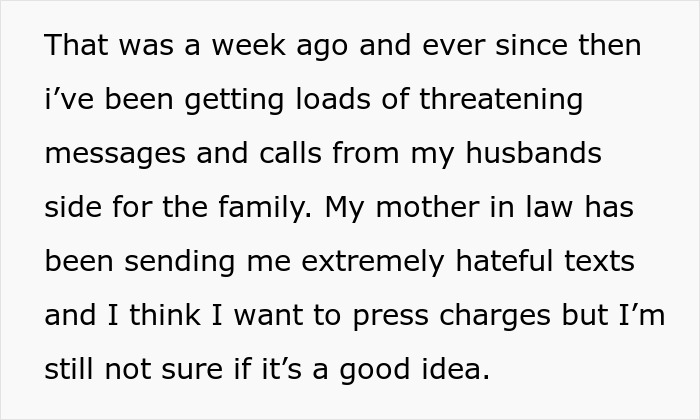 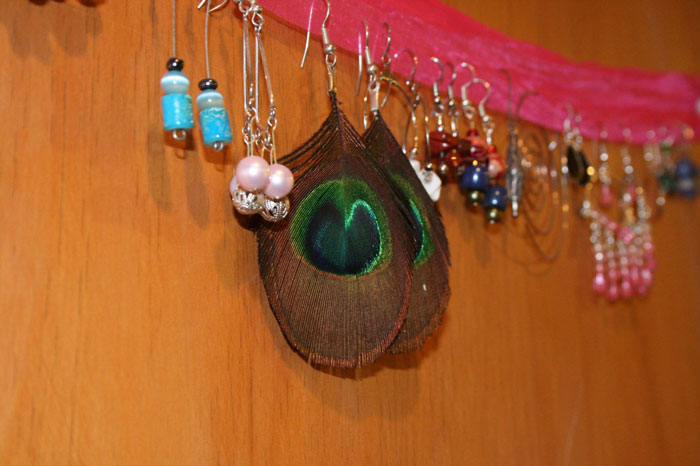 The people in the comments were encouraging the OP to do it like it happened once, it will happen again. They found it particularly bad that the mother-in-law waited until the wedding day to take them as she most likely realized that it would have upset the bride. The redditors also advised the OP to also report the harassment to add to the case.

The woman noticed all the comments and told us that their observations were eye-opening. The PO decided to listen to their suggestions because it was already what she was thinking of doing: “I decided to file a complaint, so I’m just building a case against my mother-in-law.

Why do you think the PO’s mother-in-law stole the earrings? Do you think the woman should press charges? Let us know your reactions and observations in the comments.