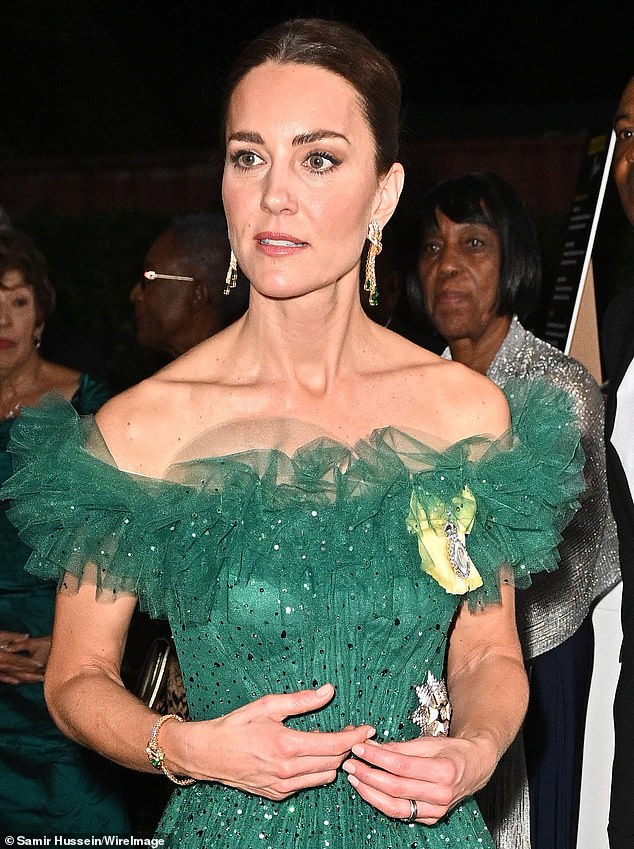 The Duchess of Cambridge shone in a set of shimmering emerald and diamond jewelery borrowed from the Queen as she joined Prince William for the black-tie engagement in Jamaica last night.

Kate, 40, wore the earrings and bracelet from the Emerald Tassel Parure collection, an impressive collection worn by the Queen on several occasions since 1989.

The origins of the jewelry have never been confirmed, but it is believed to be a gift from Sheikh Zayed bin Sultan Al Nahyan of the United Arab Emirates, as parts of the set were worn during a dinner he attended at Claridge’s Hotel.

The Duchess of Cambridge also wore her Order of the Royal Family – a decoration awarded by the Queen to loved ones – and the GCVO star, which the monarch gave her in April 2019 for her eighth wedding anniversary.

Both are worn on black tie occasions such as state dinners and are a symbol of Kate’s seniority within the royal family.

Everything that shines ! The Duchess of Cambridge borrowed the Queen’s emerald and diamond earrings and matching bracelet (both pictured) for last night’s black tie engagement 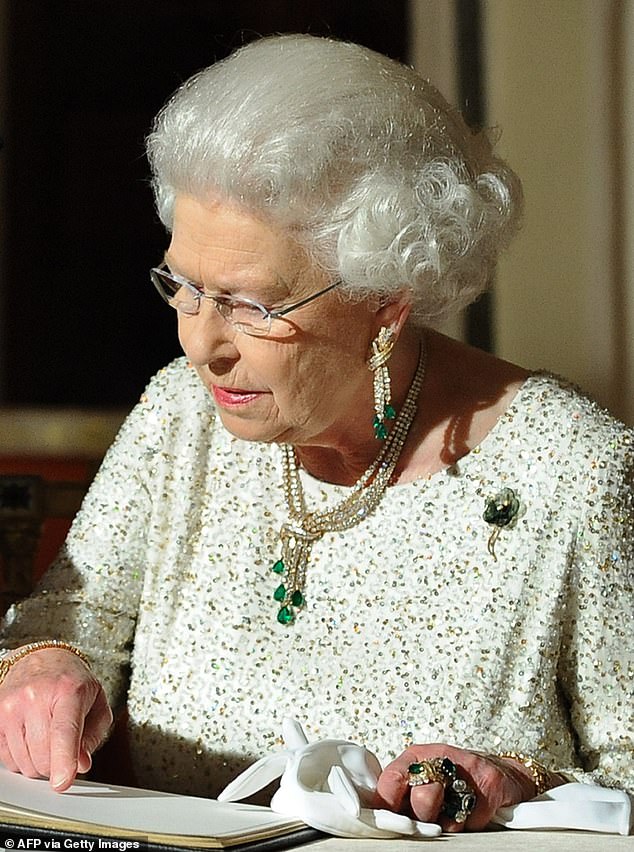 Darling: The Queen has worn the ensemble on several occasions, including at a reception for the Obamas in 2011 (pictured) There is also a necklace (seen here) that Kate was not wearing 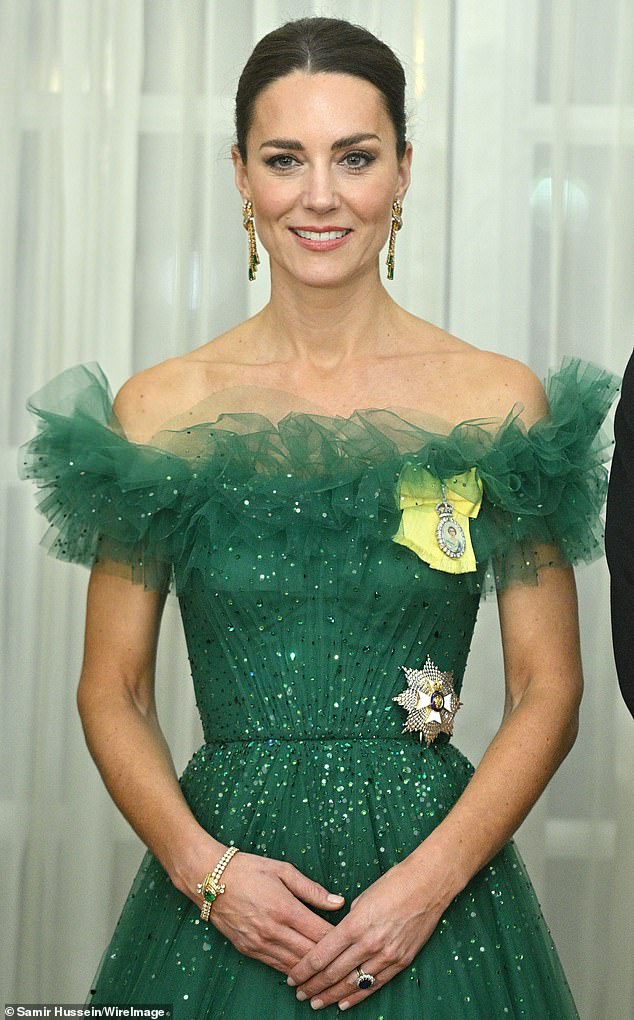 An honor from the Queen: The Royal Family Order worn by the Duchess of Cambridge 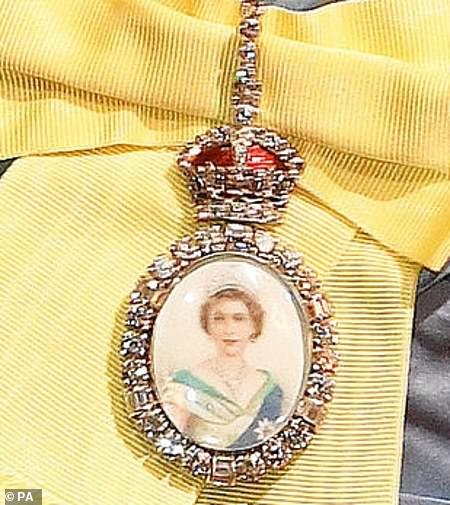 The Duchess of Cambridge wears the Royal Family Order of Queen Elizabeth II for the first time, pictured

The Duchess of Cambridge wears the Royal Family Order of Queen Elizabeth II.

The honor is bestowed by Her Majesty on female members of the Royal Family and is worn on white tie occasions such as State banquets and the annual diplomatic reception at Buckingham Palace.

The order, which is also worn by the Duchess of Cornwall, Princess Anne and the Countess of Wessex, features an image of the Queen encased in jewels pinned to a chartreuse yellow ribbon and worn on the left shoulder.

The miniature portrait, painted on glass, represents the Queen as a young woman in evening dress wearing the ribbon and star of the Order of the Garter.

The picture is edged with diamonds and surmounted by a Tudor crown in diamonds and red enamel. Its reverse, in vermeil, is adorned with rays and represents the royal monogram and the crown of Saint Edward in gold.

The Duchess of Cambridge first wore the Order at a State Dinner honoring the King and Queen of the Netherlands in October 2018.

The diamond and emerald jewels perfectly complemented the Duchess of Cambridge’s bespoke Jenny Packham dress, believed to be a custom version of the designer’s £3,791 ‘Wonder Glitter Tulle dress’.

The set also includes at least one ring, although Kate opted to leave it at home alongside the necklace.

The necklace and earrings incorporate diamonds and emeralds set in gold in a design of bows and tassels with emerald ends.

Meanwhile, Prince William appeared suave in black tie as they arrived at a dinner hosted in their honor by the Governor-General at King’s House, his Kingston residence – the most glamorous event of their tour so far . 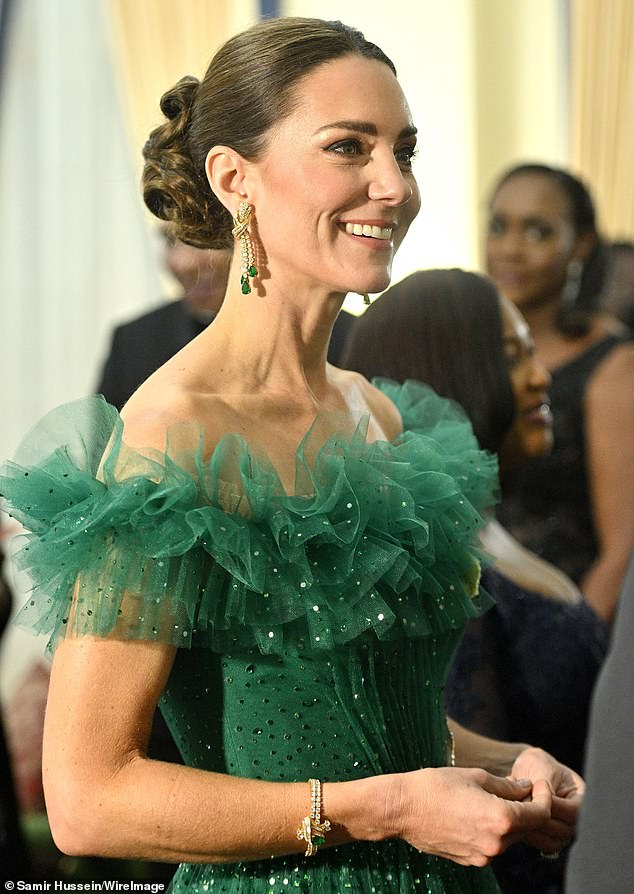 Tribute to the Queen: the Duchess of Cambridge opted for jewelry from the Queen’s collection 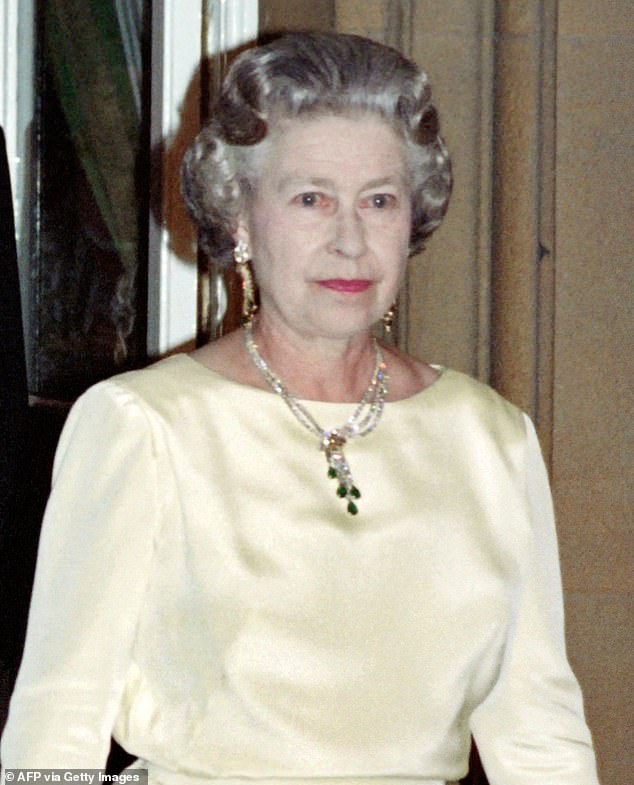 Black tie jewelry: The Queen wearing the same earrings and matching necklace (which Kate chose not to wear) at a banquet at Buckingham Palace during the G7 summit in 1991

He received a round of polite applause after expressing his “sorrow” for slavery in a speech in Jamaica at the event.

The Duke delivered his seven-minute speech in a quiet, respectful ballroom at the Governor-General’s home, King’s House.

Ninety guests listened to Duke’s every word before enjoying a four-course meal.

William and Kate met with Jamaican leaders in the mansion’s cocktail lounge.

Kate has linked up with Opposition Leader Mike Golding – whose party has said it wants the Royal Family to continue and apologize for slavery and pay millions in reparations.

The two revealed they studied at St Andrews, although Kate’s alma mater is in Scotland and the politician said his was in the US. 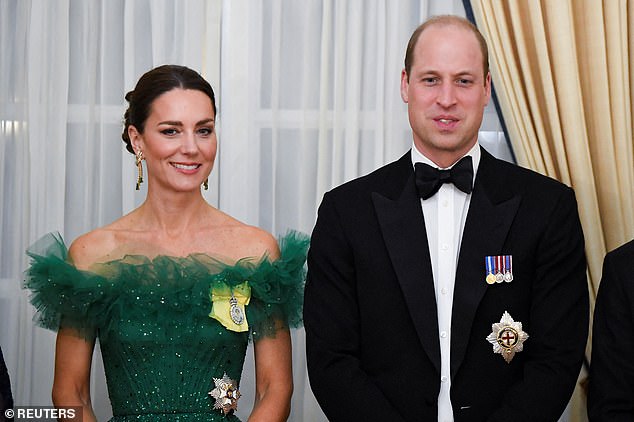 Meanwhile, Prince William appeared suave in black tie as they arrived at a dinner hosted in their honor by the Governor-General at King’s House 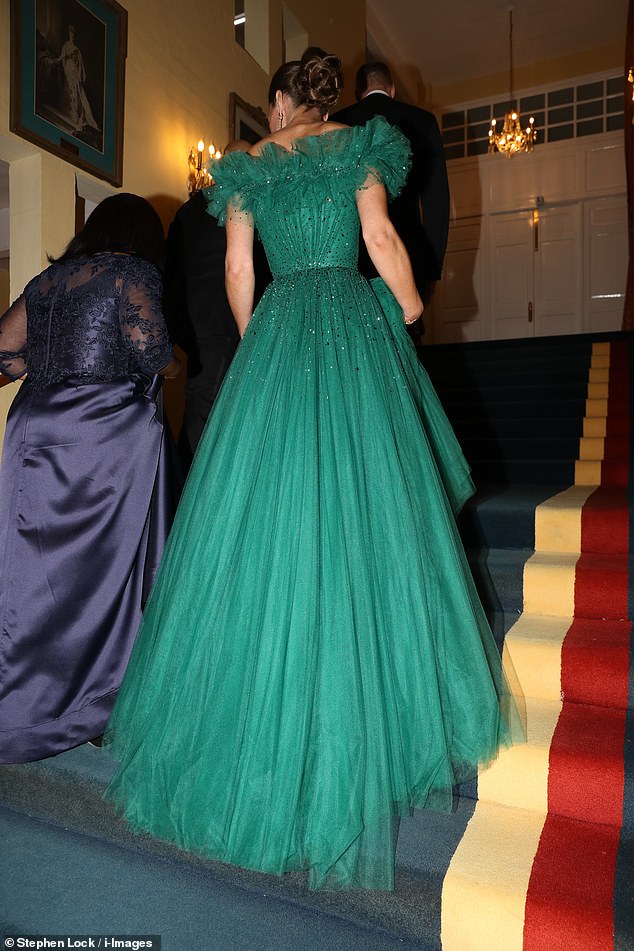 The Duchess donned an emerald dress believed to be a bespoke version of British fashion designer Jenny Packham’s £3,791 ‘Wonder Glitter Tulle Dress’ for the special occasion 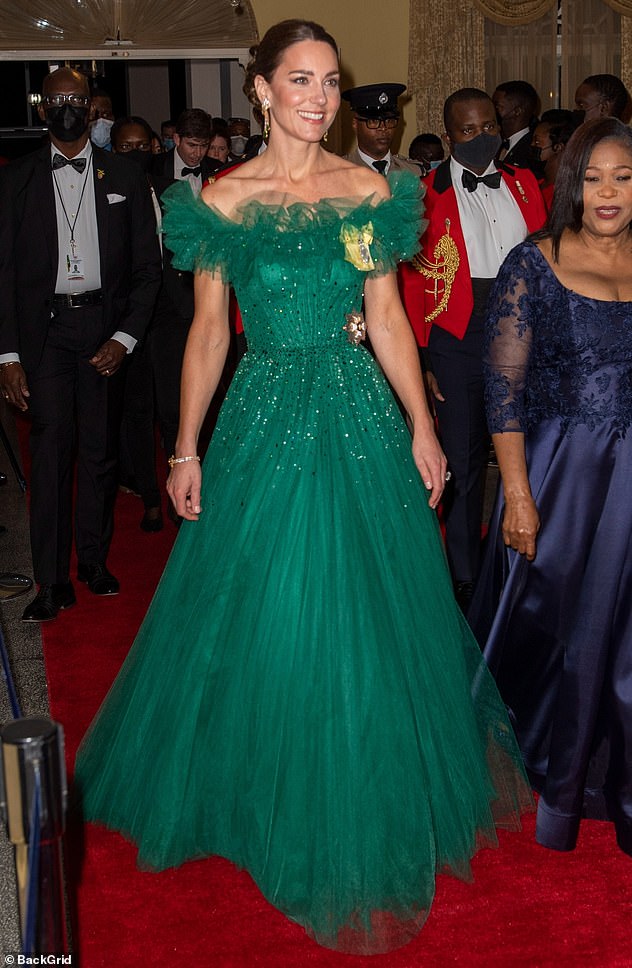 It’s not the first time Kate has worn designs from the British fashion label, which counts Angelina Jolie and Taylor Swift among its A-list fans 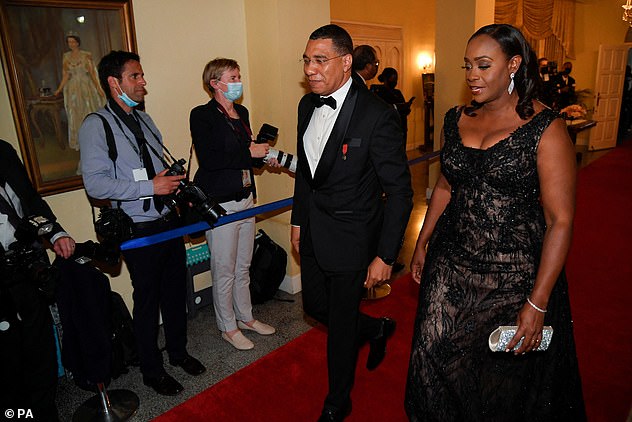 But they had a friendly chat and Kate told him, “I loved my time there.”

Mingle with the VIPs in the room, William learned how England ace Raheem Sterling had worked to help children in downtown Kingston.

William smiled and remembered his football kick at Trench Town. He said, “I have a thing for Raheem.”

The couple walked along the veranda of the mansion’s dining room, greeting guests.

Kate was heard saying, “That was great, I wish I could stay longer.” We were tempted by the beaches. Incredible landscape. 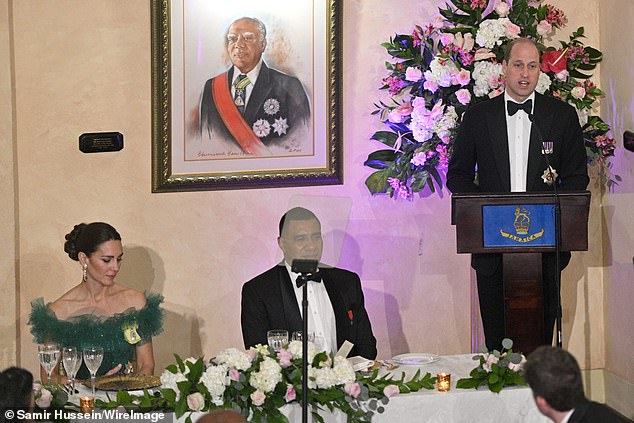 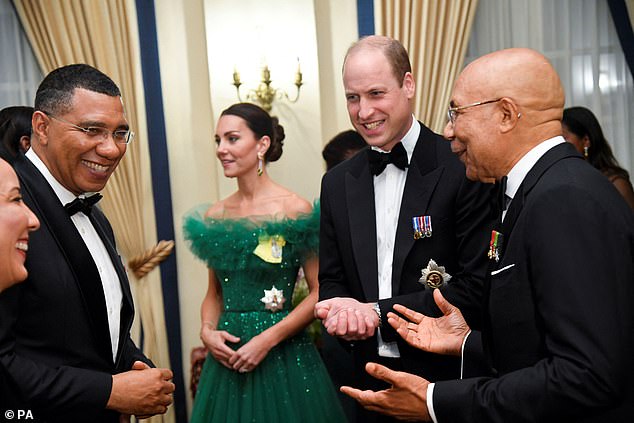 The Duke and Duchess of Cambridge attend dinner hosted by Patrick Allen, Governor General of Jamaica, at King’s House in Kingston, Jamaica

“Next time we have to come back with the kids.

Addressing another group of diners ahead of the banquet, she said: ‘The country is beautiful. We have only scratched the surface. It was so short.

They also recreated a photograph taken of the Queen and the Duke of Edinburgh on the staircase when they visited in 1954.

The Duke took his place in the ballroom at the top table – just below a red EXIT emergency exit sign.

He sat down with Kate, Governor General Patrick Allen, Prime Minister Andrew Holness and their wives.