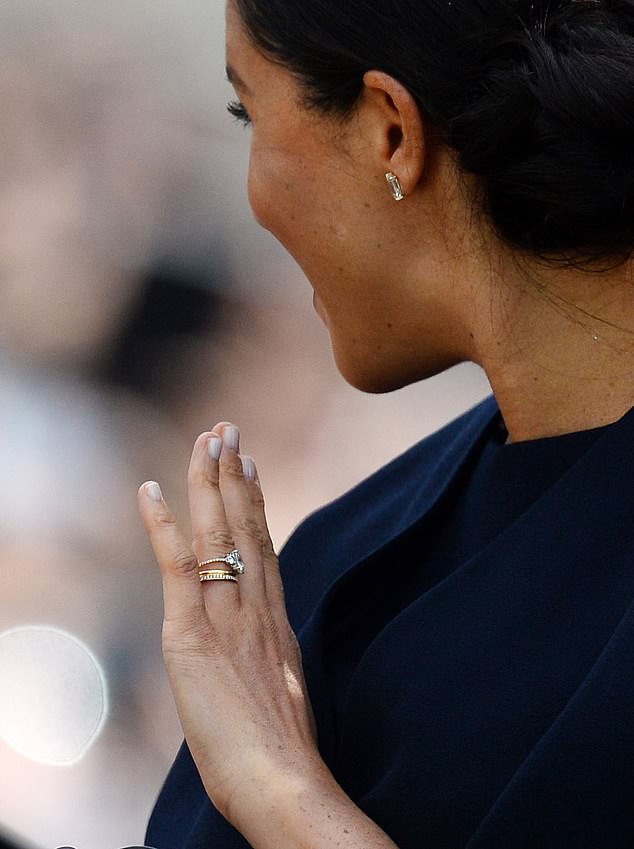 As a woman well aware that her every fashion choice will be scrutinised intensely, the Duchess of Sussex has become adept at making statements through her jewellery â€“ from wearing the same African bracelet as Prince Harry to hint that they were dating to the necklace bearing the word â€˜Mummyâ€™ she chose when she was pregnant.

So when Meghan wore an eternity ring at Trooping the Colour this month, during her first public appearance after the birth of baby Archie, it was clear it had a special significance. The bespoke diamond band designed by American jeweller Lorraine Schwartz, was given to her by her husband to celebrate their first wedding anniversary.

The ring is the latest in an extraordinary collection of jewellery that Meghan has amassed in the past year, which has now been valued at a staggering Â£600,000.

Meghan first wore this 18ct yellow gold eternity ring that marks her first wedding anniversary at Trooping the Colour. It was made for Prince Harry by Lorraine Schwartz who has also designed jewellery for a host of famous clients including BeyoncÃ© and Angelina Jolie.

It includes Princess Dianaâ€™s Â£75,000 aquamarine ring that Meghan wore on her wedding day, Â£60,000 Cartier drop earrings, and a set of Â£4,275 pearl and diamond earrings which were a gift from the Queen. In fact, the 91-piece collection, which boasts seven necklaces, 23 bracelets, 26 rings and 35 pairs of earrings, is so significant that it eclipses that of her late mother-in-law.

But while some items cost as much as a modest home in some parts of the country, Meghan is also a fan of more affordable jewellery, sporting many pieces that can be bought for under Â£100.

Jeweller Grant Mobley, who valued some of Dianaâ€™s heirlooms, told The Mail on Sunday: â€˜The Royal Family is one of the best examples of how diamond jewellery can stand the test of time, be passed down from generation to generation, and only grows in emotional and intrinsic value over the years.â€™

Even the Duchess of Cambridge doesnâ€™t have such an impressive collection: she owns about 60 pieces of jewellery, including Dianaâ€™s sapphire engagement ring worth an estimated Â£300,000, and her â€˜Saudi Suiteâ€™ â€“ a wedding gift from Crown Prince Fahd which contained a sapphire watch, earrings, bracelet, ring and necklace. 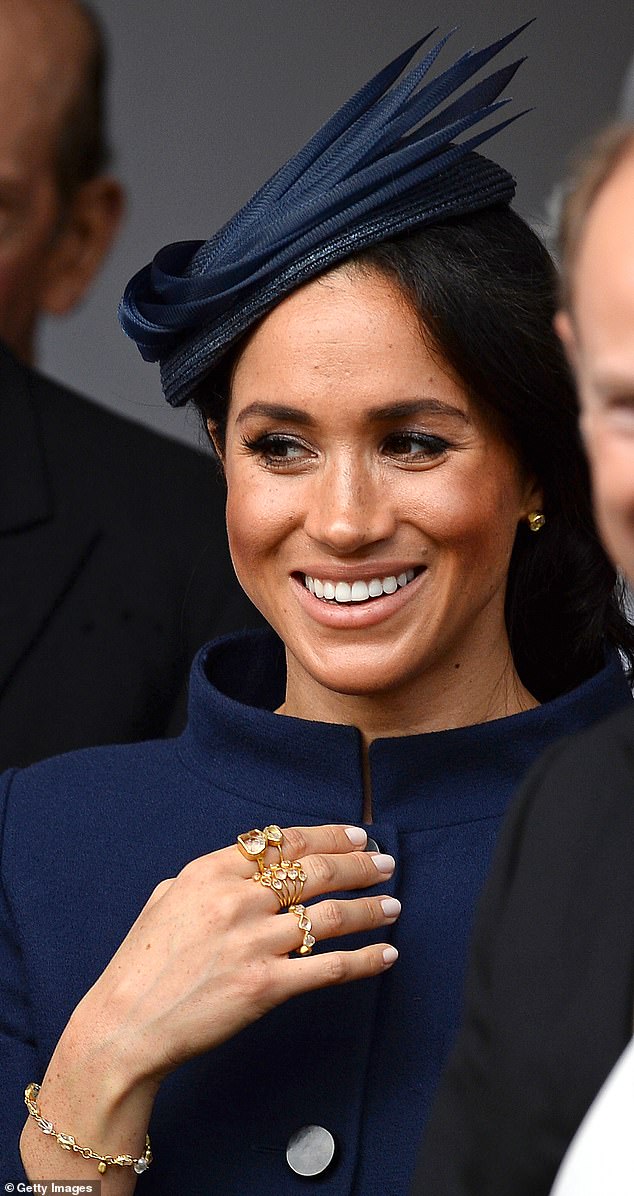 diamond ring isnâ€™t enough, wear four. Although Meghan appeared keen not to upstage Princess Eugenie at her October wedding, she attracted attention by flashing four rings on her right hand, worth a total of Â£9,000. The Pippa Small jewels â€“ crafted from quartz crystals mined from New York state â€“ were paired with a Â£2,200 diamond bracelet and Â£495 stud earrings by the same designer” class=”blkBorder img-share” style=”max-width:100%”>

One ring? No, FOUR… When one diamond ring isnâ€™t enough, wear four. Although Meghan appeared keen not to upstage Princess Eugenie at her October wedding, she attracted attention by flashing four rings on her right hand, worth a total of Â£9,000. The Pippa Small jewels â€“ crafted from quartz crystals mined from New York state â€“ were paired with a Â£2,200 diamond bracelet and Â£495 stud earrings by the same designer

Meghan, too, has been gifted items from Dianaâ€™s collection.

On the first day of her and Harryâ€™s Australian tour last year, when they announced her pregnancy, the Duchess wore Dianaâ€™s butterfly earrings and gold bracelet. A poignant message acknowledging her legacy would live on through her son and future grandchild.

But away from costly heirlooms, Meghan has been seen in elegant high street brands such as Missoma, which is sold in John Lewis. She also stacks rings on every finger and piles on the bracelets.

Mr Mobley believes that is one of the reasons Meghanâ€™s jewellery has become such a talking point. â€˜She often wears pieces that would be considered very attainable by the average person,â€™ he explains. 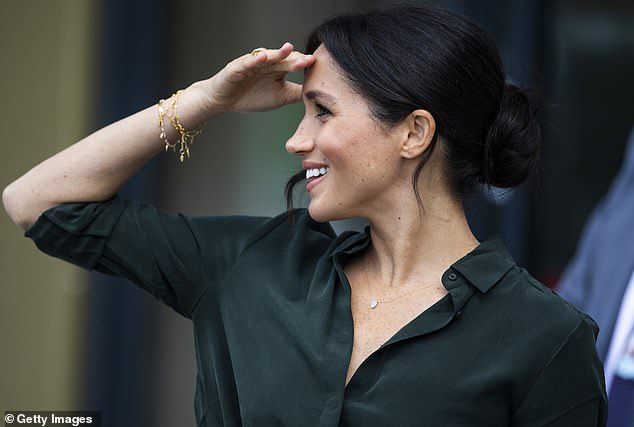 …and three bracelets on their first trip to visit their dukedom of Sussex as a married couple, Meghan wore a Â£320 pavÃ© diamond necklace by LA designer Adina Reyter, with other jewellery by Londoner Marisa Hordern, who owns the Missoma brand. She teamed three Missoma bracelets, worth Â£70, Â£75 and Â£80, with a Â£79 signet ring 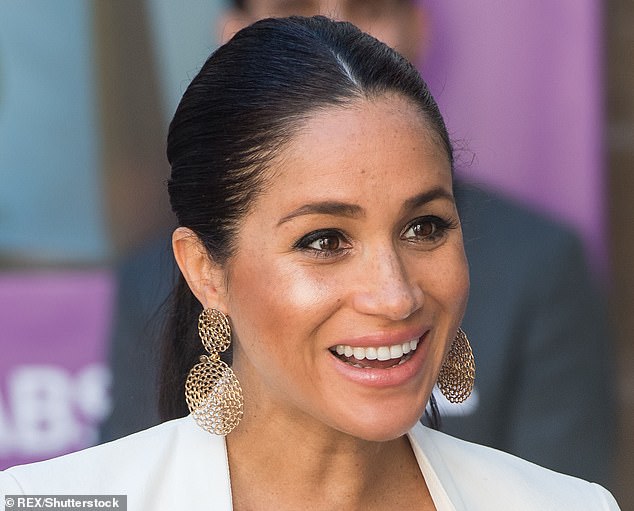 She even makes brass chic visiting Morocco in February, the Duchess showcased French firm Gas Bijoux, also a favourite of Franceâ€™s First Lady, Brigitte Macron. The extravagant Â£129 Gourmette earrings are made from 24ct gold-plated brass. The company was founded in 1969 by hip artist AndrÃ© Gas, who first sold his creations on St Tropez beach

She is drawn, too, to lesser-known designers who share her ethical and humanitarian interests.

One favourite is jeweller Pippa Small, who describes herself as an â€˜anthropologist, human rights activist and survival ambassadorâ€™. Both Prince Charles and Kate are also fans of the designer, who was made an MBE in 2013. Other favourites include Australian Natalie Marie, who uses a mixture of ethical and recycled materials, and Canadian brand Ecksand, that â€˜respects Mother Natureâ€™ by using recycled gold and conflict-free gems.

Here, The Mail on Sunday shares the most dazzling gems in the Duchessâ€™s expanding jewellery box. 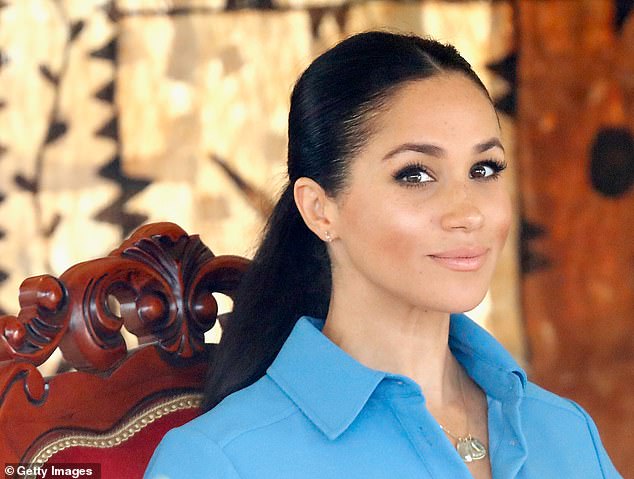 A real favourite! Meghan has worn these Â£375 Adina Reyter earrings at least six times, most recently on a visit to Tonga in October, where they were teamed with a Â£1,400 Pippa Small triple-stone aquamarine necklace. Like Meghan, mother-of-three Reyter was born and raised in Los Angeles and became a designer after a career in advertising. She created her Three Diamond Amigos earrings from 0.15ct diamonds from India 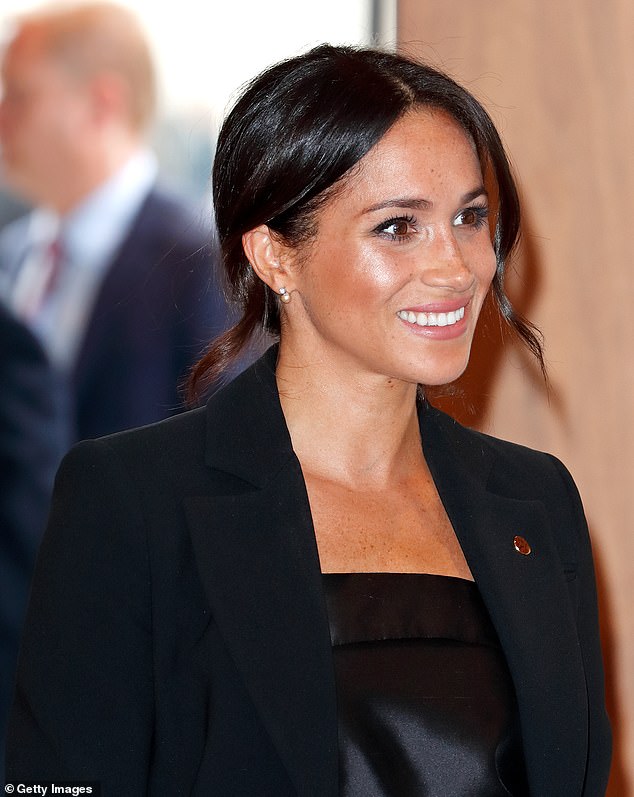 Pearls from Her Majesty: The Â£4,275 pearl and diamond earrings, which were given to her by the Queen, must be a favourite as theyâ€™ve appeared three times on public outings. The first was in June 2018, during an official visit to Cheshire with Her Majesty; then at the Wellchild Awards in September; finally for the Australasian tour last year, where Meghan wore them on arrival in Fiji 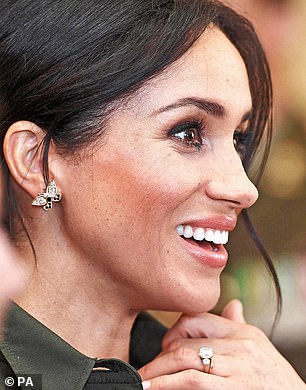 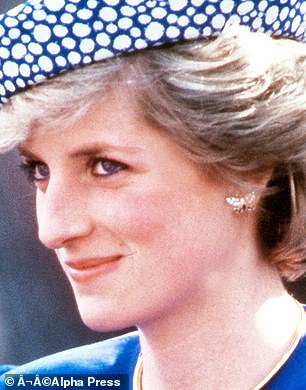 Diana wore these earrings, worth an estimated Â£2,300, on a 1986 tour of Canada when Harry was a toddler. So when Meghan wore them on the first day of her and Harryâ€™s tour of Australia â€“ to announce they themselves were to become parents â€“ it seemed apt. She also wore the Â£122,500 engagement ring designed by Prince Harry and made by Royal jeweller Cleave and Company. 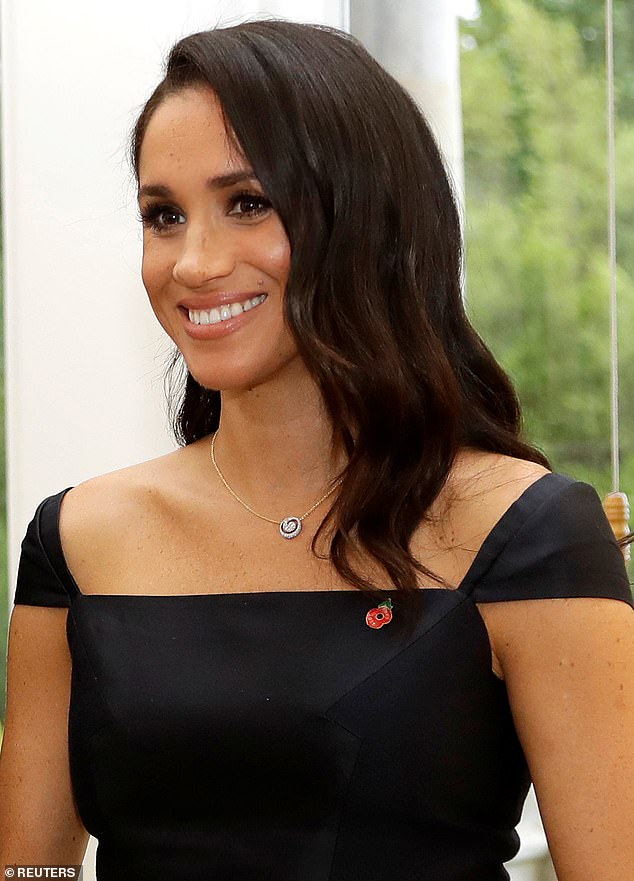 A diplomatic diamond: When meeting the Prime Minister of New Zealand at an official reception, what better item to wear than a diamond pendant by a Kiwi jeweller? In fact, Meghan wore the Â£8,800 Tattoo Diamond necklace by Jessica McCormack three times on the trip. The piece is inspired by precious objects, including traditional Maori carvings. The Duchess also inherited a new piece for her collection when premier Jacinda Ardern gave her a pair of earrings by New Zealand pop-singer-turned-jewellery-designer Boh Runga 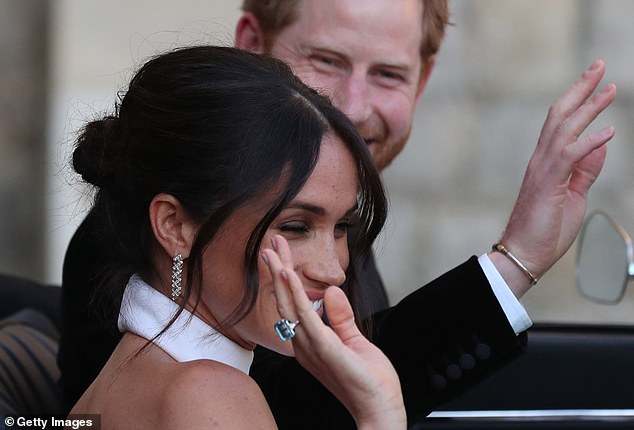 For her evening wedding reception, Meghan wore Princess Dianaâ€™s Â£75,000 square-cut aquamarine ring, which Harry gave to her as a wedding gift. She paired it with glittering Â£60,000 18ct gold Cartier drop earrings, boasting 19 round diamonds and ten rectangular stones